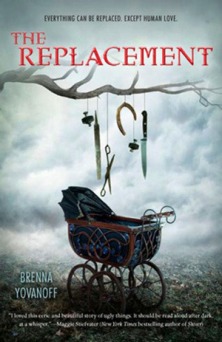 Mackie Doyle is not one of us. Though he lives in the small town of Gentry, he comes from a world of tunnels and black murky water, a world of living dead girls ruled by a little tattooed princess. He is a Replacement, left in the crib of a human baby sixteen years ago. Now, because of fatal allergies to iron, blood, and consecrated ground, Mackie is fighting to survive in the human world.

Mackie would give anything to live among us, to practice on his bass or spend time with his crush, Tate. But when Tate’s baby sister goes missing, Mackie is drawn irrevocably into the underworld of Gentry, known as Mayhem. He must face the dark creatures of the Slag Heaps and find his rightful place, in our world, or theirs.

“The simple truth is that you can understand the way you are. You can know and love and hate it. You can blame it, resent it, and nothing changes. In the end, you’re just a part of it.”

I’m so sad I didn’t enjoy this book. I did for some of it. I was expecting more, something spectacular. The cover doesn’t match the book. The synopsis completely ruins the story. Everything that happens in the synopsis doesn’t start happening until 70% of the way through the book. Like what even. Why was it in the synopsis in the first place?

The characters weren’t remarkable. The only one I may have liked a little bit was Emma. She was cute and fun. The rest of the characters were bland and dull. I probably won’t even remember their names in a few weeks. Plus there was some weird romance thing going on??? The characters had feelings for each other apparently, but there was nothing there to build the feeling of liking each other. Nothing. It was a horrible writing romance.

The writing also wasn’t at all remarkable. It felt very generic. It also got confusing with the dialogue. There would be two characters and all of a sudden dialogue would start but it wouldn’t say who was saying what. I got really confused on what was happening. I hate dialogue like that.

Lastly, there was some crazy plot holes. I have no idea how no one noticed. Mackie, our main character, is suppose to be crazy sensitive to literally everything. It describes him as being sensitive to light and sounds, but he can go to a rock concert with no problem? Also the book described him being deathly allergic to iron. Then all of a sudden he’s allergic to stainless steal, then metal. BUT HE CAN DRINK OUT OF A BEER CAN WITH NO PROBLEMS.

I don’t think I’ll read anything else from this author. I’m just really disappointed. I wanted to like this book because I really love the cover. The cover is gorgeous. Have you read it? What did you think about it? Did you like it?

2 thoughts on “Book Review: The Replacement”