Ketterdam: a bustling hub of international trade where anything can be had for the right price—and no one knows that better than criminal prodigy Kaz Brekker. Kaz is offered a chance at a deadly heist that could make him rich beyond his wildest dreams. But he can’t pull it off alone…

Kaz’s crew are the only ones who might stand between the world and destruction—if they don’t kill each other first.

I’m reading this story as of Sunday, January 22nd, 2017. This may change by the time this blog post goes up but I’ll be lazy to change it XD I recently finished the Grisha trilogy by Leigh Bardugo so I figured I’d read this dulogy because I missed the world of the Grisha. This book had a slow beginning and I wasn’t too keen on the characters but they’re starting the grow on me. 🙂 Review will sure be here soon on the blog 😀

Finished Reading:
(only read the synopsis if you have read the first two books in the Grisha trilogy!)

The capital has fallen.

The Darkling rules Ravka from his shadow throne.

Now the nation’s fate rests with a broken Sun Summoner, a disgraced tracker, and the shattered remnants of a once-great magical army.

Deep in an ancient network of tunnels and caverns, a weakened Alina must submit to the dubious protection of the Apparat and the zealots who worship her as a Saint. Yet her plans lie elsewhere, with the hunt for the elusive firebird and the hope that an outlaw prince still survives.

Alina will have to forge new alliances and put aside old rivalries as she and Mal race to find the last of Morozova’s amplifiers. But as she begins to unravel the Darkling’s secrets, she reveals a past that will forever alter her understanding of the bond they share and the power she wields. The firebird is the one thing that stands between Ravka and destruction—and claiming it could cost Alina the very future she’s fighting for.

I was satisfied with the ending to this trilogy until I read someones spoiler review of it on goodreads. I still loved the books but my opinion on how the story ended has changed a little. Overall, I still higly recommend this trilogy! If you’ve read it, check out my spoiler discussion! 😀 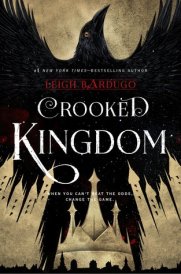 Reading Next:
(only read synopsis if you’ve read Six of Crows)
Synopsis:

Kaz Brekker and his crew have just pulled off a heist so daring even they didn’t think they’d survive. But instead of divvying up a fat reward, they’re right back to fighting for their lives. Double-crossed and left crippled by the kidnapping of a valuable team member, the crew is low on resources, allies, and hope. As powerful forces from around the world descend on Ketterdam to root out the secrets of the dangerous drug known as jurda parem, old rivals and new enemies emerge to challenge Kaz’s cunning and test the team’s fragile loyalties. A war will be waged on the city’s dark and twisting streets―a battle for revenge and redemption that will decide the fate of magic in the Grisha world.

It was hard to copy this synopsis and write here and not spoil myself for this book (because I currently haven’t finished Six of Crows yet). However, I’m excited to see where the story goes. The first book is decent so far 🙂