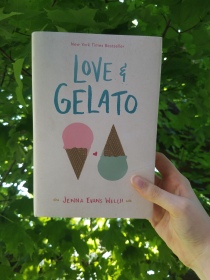 “I made the wrong choice.”

Lina is spending the summer in Tuscany, but she isn’t in the mood for Italy’s famous sunshine and fairy-tale landscape. She’s only there because it was her mother’s dying wish that she get to know her father. But what kind of father isn’t around for sixteen years? All Lina wants to do is get back home.

But then she is given a journal that her mom had kept when she lived in Italy. Suddenly Lina’s uncovering a magical world of secret romances, art, and hidden bakeries. A world that inspires Lina, along with the ever-so-charming Ren, to follow in her mother’s footsteps and unearth a secret that has been kept for far too long. It’s a secret that will change everything she knew about her mother, her father—and even herself.

People come to Italy for love and gelato, someone tells her, but sometimes they discover much more.

“And why did he have to call me “quiet”? I hated being called quiet. People always said it like it was some kind of deficiency—like just because I didn’t put everything out there right away, I was unfriendly or arrogant. My mom had understood. ‘You may be slow to warm up, but once you do, you light up the whole room’”

This book was freaking adorable. I really enjoyed all of the characters. I don’t know who my favorite would be. Howard was beyond adorable. He was such a fantastic father. He was so sweet and so kind. I also loved the voice of the main character, Lina. She was fun and sassy. She was just a fun character to read about. She reminded me a little bit about myself.

I thought the writing was rich and captivating. It made me feel like I was actually in Italy. It felt like I was there experiencing everything Lina was. I felt like I was traveling without actually leaving my seat. I think that what really makes a book feel magical… when it can take you come place new for awhile.

Although I adored this book, I did have a few problems with it. I enjoyed the mystery of the story but I thought it was a little too predicable. I felt like I was running around in circles with Lina even though I knew how the story was going to end.

And although Lina was in Italy and didn’t understand Italian, it bothered me a little bit that the characters were sometimes talking in Italian, and the book never explained what they were saying. I wanted to know but I didn’t want to put my book down every few minutes just to google phrases.

Overall, I thought it was a fun read. It has a little bit of heavy matter involved but it didn’t take away from the cute fluffy feels I felt while I was reading about Lina’s story. It was the perfect summer book and I’m so happy I started my June TBR with it! 🙂