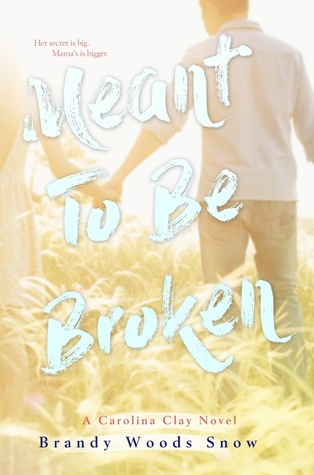 Rayne Davidson is perfectly happy fading into the background. Her mama’s antics garner enough attention in their small Southern town for the both of them, but when Rayne catches the eye of all-star QB, Preston Howard, she’s enamored with the possibilities. Too bad Preston doesn’t make her heart thump—but his brother does.

Gage Howard doesn’t mind the town’s stares, probably because he doesn’t get them. Growing up in his older brother’s shadow, Gage shrugs off the endless parade of girls Preston brings home—until Rayne.

But there are unwritten rules that shouldn’t be broken, like cheating on your boyfriend or betraying your brother. Rayne and Gage deny their growing attraction, neither willing to hurt Preston—until the town finds out.

They think overcoming the gossip will be the hardest obstacle.

Rayne’s mama has a secret, and its revelation could divide the town, the families, and the new couple.

Can love really exist if it’s all built on a lie?

“If Mama lived with this [anxiety] everyday and still managed to keep our home running, then she was the strongest woman I ever knew and probably will know. I always called her weak. I was wrong.”

This book pissed me off so much, but I loved it too. These thoughts are going to be a jumbled mess. So let’s just do what I do best and drive right in.

I loved the short chapters. Short chapters are my favorite because it makes me feel like I’m reading relatively fast. Plus the chapters are in different points of view which I also thoroughly enjoyed. It was cool seeing different peoples opinions on Preston. Although I love alternating POV’s, sometimes they become frustrating as well because you know what each other the characters are thinking while the other character does not and then there is a huge disagreement. I kept shouting in my head, “JUST TALK IT OUT!”

For the most part, I thought the pacing was pretty good. It felt a little too slow towards the ending. Like the pacing did well in the first 200 pages then felt really slow after that. I think it felt slow for me because the book changed directions and I was exactly expecting it to.

I could relate to Rayne. She’s dating a guy but falls in love with his brother. I was in a relationship relatively recently and realized I was falling for my best friend. I could relate to her guilt and not wanting to feel that way. In a way it was different for me because I was with my ex-boyfriend for almost 2 years so it felt wrong to be attracted to someone else. It worked out in the end though.

I really loved all the characters. Brandy did a great job at making the characters feel alive. They felt real. They became my friends. A part of me will cherish them for a long time. Brandy did an excellent job at giving them each their own personality and their own voice. It’s so hard for me to read a book if I can’t connect with the characters or if they’re bland. I fell in love with Gage. My book boyfriend ❤

One thing I didn’t like was how Rayne viewed anxiety in the beginning. The way it was described in the book left a bad taste in my mouth because I struggle with anxiety. I felt sort of offended. I know Brandy didn’t mean it that way but I couldn’t help it. Rayne does end up changing her views about it though in the end which I appreciated.

Rayne and Preston’s relationship seemed a little insta-lovey. However, the slow burning romance between Rayne and Gage was very well done. Okay, I lied. Their romance was to die for. They’re perfect for each other. I was constantly rooting for them. Yes there is a love triangle in the book, which I usually despise, but this made sense. I feel like some authors just add a love triangle into the story for the sake of drama, but this was one really well done.

The book felt longer than it needed to be. After like 300 pages it started to feel like I was reading a soap opera. There was so much drama and so much happening within the plot. There was a point where I got so annoyed that I started to care less about the characters, but they won me over again in the end.

Overall, this was a cute southern book. It was had a good small town feel to it. I grew up in a small town Michigan, but I could still relate to the small town in this book. Everyone seems to know everyone else’s business whether you want them to or not. I recommend this if you want to read something makes your heart melt but also makes you want to chuck your book at the wall.

If you would like to win Meant To Be Broken by Brandy Woods Snow please enter below! (Also I’m really new at RaffleCopter so I hope I did it okay!)

Excerpt from the book:

At 9:30 Saturday morning, I find out Preston Howard wants to date me. At 11:30, my mama hears it from old lady McAlister and has a “spell” in aisle three of the Piggly Wiggly. It’s taken seventeen years, but I finally understand the two things my social life and Mama have in common. They’re both erratic and one usually suffers because of the other.

The store manager calls me on my cell and asks me to come get her. He has my number because he’s Daddy’s best friend’s brother and used me to babysit his kids a few times last year. I answer, expecting another job offer.

“Rayne? This is Dave Sullivan, you know, the manager down at the Piggly Wiggly? There’s been an incident with your mama.”

3 thoughts on “GIVEAWAY & Meant To Be Broken ARC Review”